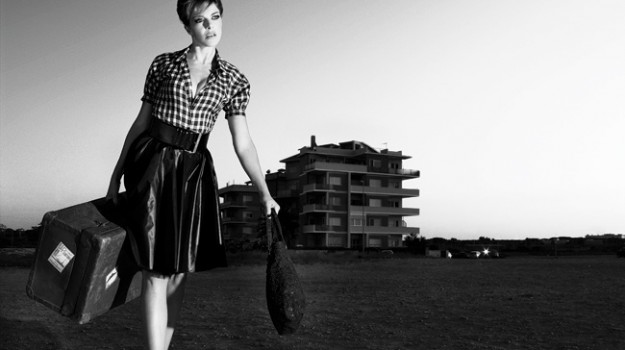 Artists get inspiration in many different ways, sometimes it’s a place, sometimes a color, sometimes it’s a person. I was surfing the web a while back and came across a project that the the great photographer Douglass Kirkland had done for Vanity Fair Italia to celebrate the magazines 50th anniversary. Kirkland did “remakes” of 25 famous scenes taken from Italian cinematic classics, with well-known contemporary Italian actors playing the legends of the past.

One picture that struck me in particular was Kirkland’s remake of La Ragazza con la Valiglia 1960 (Girl with Suitcase) by director Valeri Zurlini (photo seen to right). I liked starkness of the scene and the look of simplicity with the lighting.

The idea to do an updated version had been rattling around my head for a while. I had a session scheduled to shoot with a versatile model I had worked with before, Crystal,  and after talking about it a bit we figured we’d give it a shot. I decided to use the railroad tracks close to the studio and update the look to a 60-mod feel, maintaining the stark backgrounds and simple lighting, but keeping the idea of a young ladies departure as  consistent theme. Crystal had a great dress and borrow the vintage suitcases from her father, both of which worked perfectly for the “updated” look I was going for. We were racing an incoming rain shower, which actually really worked well for the atmosphere for the shoot.  Below are the results of the session, which I was very happy with….thanks again Crystal, as always great working with you, looking forward to another session!